A Short(ish) History of Swing Dancing 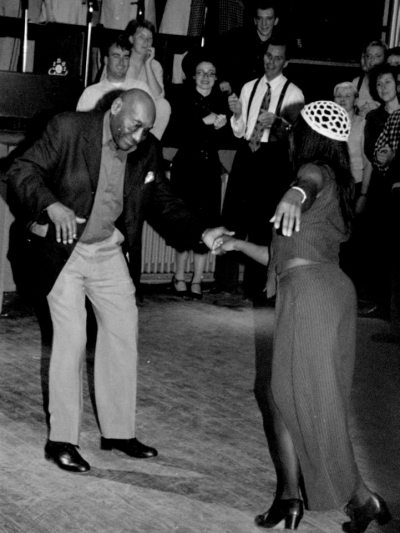 ‘Swing dancing’ refers to a variety of dances that developed predominantly during the ‘swing era’, alongside the swing style of jazz music that was popular in the late 1920s to the late 1940s. During this time, there were hundreds of styles and regional variants of swing dances; the most popular survivors of these being Lindy Hop, (solo) jazz, Balboa, Collegiate Shag and Charleston.

By far the best-known swing dance is the Lindy Hop, which evolved during the “Harlem renaissance” of the early 1930s in Harlem’s great ballrooms - the Alhambra, the Renaissance, and perhaps the most important Ballroom of all: the Savoy. Legend has it that the Lindy was created by dancers “Shorty” George Snowden and Mattie Purnell: dancing a form of partnered Charleston, the story goes that Shorty rocked back on his heels and swung his partner out into open-position in a step that became known as the breakaway. It was from this idea, and the change in jazz and swing rhythms in the late 1920s to early 1930s, that the Lindy was born. Just as swing music developed by taking influence and inspiration from other forms of music, the Lindy Hop absorbed and expanded with the influence of other dance styles.

In parallel to the Lindy, solo jazz dances also evolved, heavily influenced by Charleston and tap dance, as well as other styles of the time such as Mambo - a dance which evolved in the Cuban-American communities of the Bronx. Although the term ‘jazz dance’ has a different meaning in popular dance today, within the swing community, authentic solo jazz dances of the swing era are commonly referred to simply as ‘solo jazz’. 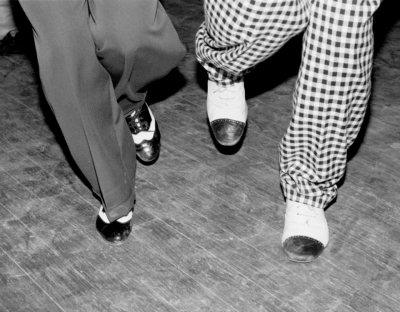 The group most instrumental in popularising Lindy Hop across the United States was Whitey’s Lindy Hoppers - a troupe of mostly black dancers from Harlem’s Savoy Ballroom. Their core team performed around the world at esteemed venues such as the Cotton Club in New York and the Moulin Rouge in Paris, and in several Hollywood films of the era including A Day at the Races and Hellzapoppin’.

The Lindy was a dance of freedom and liberation for the African-American community. Although it supposedly represented "the American spirit"; those who created it were kept in their place by racial segregation and discrimination. Scenes showcasing the talent of Whitey’s Lindy Hoppers were excluded from films when screened in America’s south, where the ‘Jim Crow’ racial segregation laws were still in effect. As former Whitey’s Lindy Hopper and famed Queen of Swing Norma Miller said, "A lot of people wanted to do this dance. But we had an edge … We didn't want them taking our dance - they had everything else." 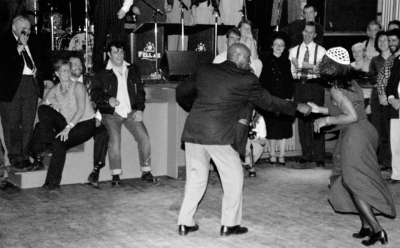 While the majority of swing-era dances like Lindy Hop, Charleston and solo jazz began in African-American communities in the United States, as swing music and dance swept across America - partly due to the national success of musicians including Count Basie, Duke Ellington, Benny Goodman and Artie Shaw - other communities also developed their own swing dances.

The Balboa was a dance which originated during the 1920s, and evolved significantly with the rise of swing in the ‘30s and ‘40s. White dancers in Southern California would converge on the Balboa Peninsula, bringing the dances that were popular in LA or Catalina, to pack the famous Rendezvous Ballroom - it was in this cramped space that Balboa was born. Originally the term ‘Balboa’ referred to a dance characterized by its close embrace, but over time, influence from other swing dances which incorporated turns and open-position movements merged with Balboa, creating what is called Balboa or Bal-Swing today.

Another famous swing dance with roots in the Charleston is known as the Collegiate Shag. A partnered dance, ‘Shag’ is often done to uptempo swing and pre-swing jazz music (180+ beats per minute). Although its origins are less clear than the Lindy, it is believed to have originated within the African-American communities of North and South Carolina, before later spreading across the United States. Former Whitey’s Lindy Hopper Frankie Manning recounted seeing Shag danced at The Savoy, describing it as ‘a closer-embrace partnered Charleston with kicking heels behind more than swinging legs’. Collegiate Shag is not to be confused with other dances such as St Louis Shag and Carolina Shag. 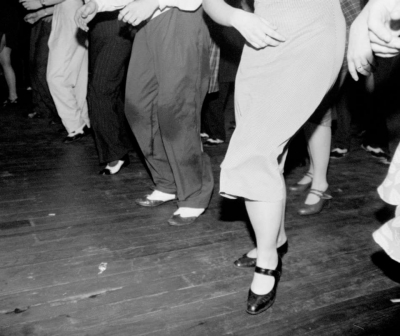 After World War II, the popularity of swing dances declined as taxes were introduced against “dancing” nightclubs, and other styles of music grew in popularity. Out of swing, new dance styles evolved which captured public attention. However, many dances like the Lindy, Shag and Balboa never disappeared - the communities that created these dances continued their traditions, and it is thanks to these communities that swing dancing was able to again spread around the world. In the 1980s, dancers from both Sweden and the UK approached former members of Whitey’s Lindy Hoppers - including Al Minns and Frankie Manning - to teach them what they knew about Lindy and solo jazz dances. It was these encounters which lead to what is known as the ‘swing revival’ - a renewed, international interest in learning swing-era dances.

Today Lindy Hop, Balboa, Collegiate Shag, and other authentic jazz dances are danced all around the world: from the birthplace of the Lindy in New York City, to Seoul, Korea; from Stockholm, Sweden, to Maputo, Mozambique; and from Sydney, Australia, to right here in Belgium.